Shopping is not something I do well, nor do I particularly like it.  But I am so scared of the cold, that I am turning into a researcher and online shopper. Altho’, I am still waiting to see if the rain/snow pants I ordered have been lost in cyberspace!

Importantly, I finally found some boots that won’t be too heavy but I think will do the job! I have had good luck with Vasque, so hopefully they’ll fit!  Most of the contenders were three plus pounds.  Weigh too heavy!  These are one and a half. 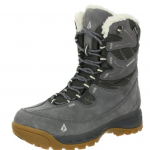 Oh. I also got myself a BUFF, the Spanish Merino wool tube that all the cool backpacker types use to wear in a number of ways..as a hat, as a scarf, as a balaclava….  I tried it last night as a sleeping cap (the temperatures dropped way below freezing,) and it stayed on and did the job!  Very cool…mine is red.

Would that I looked like the model in it. Instead I look a bit like a Russian grandma…which, I guess I am, partially!!!

And I have some Merino wool long undies…a zip top and a pair of leggings by Bergen of Norway…They are a beautiful deep lavender, and have interesting construction. BTW, I did NOT get them, nor my buff, online.  Nope, I went to The Ledge, right here in Klamath Falls.  Felt good.