Across the moat that surrounds the Forbidden Palace, on the far end from Tian’an Men Square, is a little park where little dogs are happily arguing the balance of power while their masters chat about them. It feels like a park I used to take Mick to in Sausalito, only the language is wrong, and the walls of the emperor’s fortress are reflecting in the water instead of the masts of a bevy of sailboats. 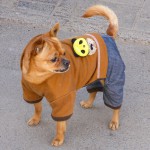 Beijing is filled with dog lovers, I remember taking notice of this on my first trip. But now that China is fashion-minded, it is quite something to see the outfits that dogs parade around in. Of course, this is mostly the situation when the owners are women. Which is not to dismiss the doting dog dads. Pretty cute…and not one person objects to me photographing their pup! 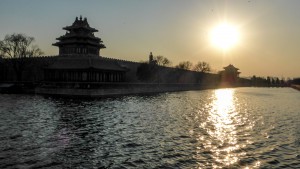 The moat at the far end of the Forbidden City. Finding it was happenstance. Pretty cool, eh!

It is late afternoon, and while walking down a big and busy street, a large group of mostly African Americans, with guide, pass me. It is noticeable seeing black people here… and nice to hear someone say “hello” without an accent. Then I spot hoards of people just ahead and many guides holding up their flags. And an old-looking structure looms in the near distance. I figure I must have happened upon something important. I have. The tiered building is one of the perimeter guard towers for the Forbidden City, and I am at the moat surrounding this lofty complex. Lordy, Lordy.

The channel is large, and the scene is a potential beauty shot. Many photographers have set up cameras on tripods, awaiting the setting sun. I decide to join them, armed only with my tiny lumix that doesn’t even shoot raw. But it is a feather weight, and I am exploring Beijing via foot. (I often use it to take pictures of intersections, so if I have to retrace steps, I know where to turn.)

The cold is getting to me, so I leave the pretty image to the pros and begin to wend my way back toward familiar territory. In this part of Beijing, the hutongs look to be family dwellings of normal folk. No tourist shops. No Audi’s. The majority of alleys here are too narrow for cars anyway, but a few motor bikes and tiny three-wheeled trucks are parked near gated sub-alleys leading to people’s homes. Nearly all of these passages harbor bicycles, which warms my heart even though the condition of most is pretty poor. I miss the bicycles of Beijing, which used to dominate the streets.  There are some old peddle rickshaws lined up against a wall, chained together like a convict crew.  I see very few people, except on the market streets. 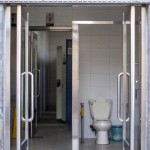 Hmm, I am always happy to see a western toilet, BUT….the outside door is glass, and there is NO door on the stall. ?????

A significant change since last I wondered the hutongs of Beijing, likely the result of the Olympics being held here, is that the bathrooms are no longer smelly. Rather than the open trough one had to straddle with whomever else was present, now there are private stalls with flush toilets, albeit usually the squat kind. In summer the difference must be a life-changer for the residents. It was downright terrible before. I even see western style toilets available in some spots, maybe for the elderly or maybe for wheelchair access. One such toilet was in plain view from the street like a throne of honor? Eesh.

Public restrooms are plentiful, as the many residents of the hutongs often have no facilities of their own. And, most are very clean. However be forewarned: one must carry toilet paper, as none is supplied. This is true most everywhere in China.

The little hotel where I am staying has running water with a toilet and shower in each room, and it is definitely part of the hutong. Rooms are situated around a courtyard, which is typical. I guess that it was once a family compound, but I wonder how it got the water and sewage. Due to the language barrier, it will remain an unanswered question.

This walk has been great fun, and it is days like today when I realize that sometimes it is actually preferable to travel solo. I can amble at will without worrying about where I am going, nor how or when I will get back. And more significantly, I don’t have to consider my traveling partner. Mostly, like today, I am rewarded with something special, but sometimes the trek is a dud. Hard to share that. Plus, usually traveling pals like to eat, and often at somewhat regular intervals. Not so important for me. Oh, well. Just lost you as a wayfaring partner, didn’t I? 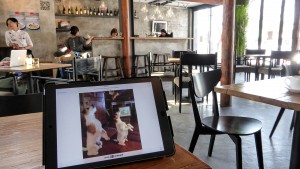 This is a wonderful place catering to foreigners, especially Westerners. It is quite comfortable being there solo.

That said, it isn’t much fun to eat alone. When it comes to having a meal, I do prefer a sidekick. Still, I often manage to find someplace where I am comfortable. In Labrang it was Cafe Nirvana, here it is a terrific restaurant, Zarah, which has a tasteful photography show, elegantly hung, and good food. These places seem to cater to foreigners with electronics, and, that’d be me! I join my fellow keyboardists for lunch, enjoying a fresh salad and a glass of a very nice white wine while posting on my blog. It is pleasant being surrounded by like loners, mostly westerners who speak languages I don’t comprehend. I have come to enjoy both not understanding and not being able to speak, just listening…in other words my muteatude.