Todays perambulations have taken me to new hutongs and more water. The goal is the Back Lakes area of Beijing, Shicha Hai, a series of man-made lakes once part of a system used to transport grain by barge from the Grand Canal to the Forbidden City. It is a pretty scene, with fishermen on the periphery. Low carved marble balustrades outline the lakes, with arched bridges for pedestrian traffic at the narrows, where each body of water connects. The district is filled with small shops, restaurants, and Chinese tourists.

“Wack, wack, wack.” Mallards. I do want you to know that conservation is alive and well here in the middle of Beijing. Not far from the shore, right next to the swan boats, is a tiny man-made island, maybe 30 x 40 square feet, with nesting condos for wild ducks! It is a big deal. The government has gone so far as to mount a large plaque, praising the residents on the merits of this significant conservation effort. 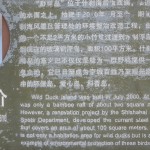 Praise for conservation effort. Click on photo to read.

Prior to 1911, the Back Lakes district was an exclusive area, where only people with connections to the imperial family were permitted to maintain houses. It has that feeling still. I see a beautiful doorway that is slightly open, revealing cascading orchids. A well-dressed man comes out and when I ask if he speaks English, his answer is in English without a trace of accent, as is his reply when I asked what establishment lies (lays?) beyond the gate. It is a restaurant, open for lunch and dinner. “A very fine restaurant,” I say. “Thank you,” says he. Seeing my interest, he added, “but you would need a reservation.” This is a euphemism for his assumption, correct as it may be, that I am not up to snuff for his place of business. (BTW: Fashion is in fashion here. The well-to-do dress for such venues. And most of the women I have seen climb out if the plentiful Audis, BWMs, and Mercedes are young and beyond beautiful, although “mother” is frequently dowdy.)

My meander today lasts for about eight hours, primarily exploring the alleys. I surface every now and then to get my bearings. With only a map for the subway system rather than the streets, every time I come across a station, I orient myself, then dive back in. I am always happiest when I am deep inside, where tourists don’t often wander. The people tend to be much friendlier. 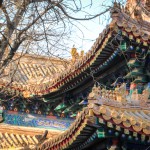 Roof tops of the Confucian temple in Beijing. Note the blue sky!!!!!

This day’s great surprise is the Confucian temple, at which I arrive after passing through a stunning ancient gateway crossing the rather wide alleyway I have been exploring. The temple, closed for the day, is an impressive compound built in the 1300s. My view is whatever is above the wall, which is quite impressive. It has been my luck to arrive at significant historic sites after hours. Perhaps it is because on previous trips I have spent most of my time looking at the ancient that I do not feel I am missing anything. I have enjoyed blue skies over Beijing. And, not everyone can say that! 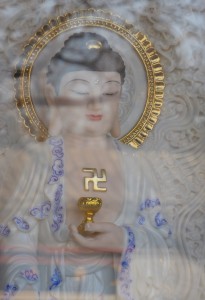 Not far from the Confucian complex is the Yonghe Lama temple, another old, large, spiritually oriented place. I feel like I have found the philosophers’ corner. Emerging onto a large boulevard filled with colorful gold gilt shops garnished with prayer flags blowing in the breeze, Chinese Tibetan trinkets, incense and golden Buddhas are mine for the paying. O mani padme hum blasts from speakers in front of a closed door decorated with Buddhist symbols, outside of which burns a lovely smelling offering. It feels sincere. Still, there is an oddness to the isolation and marketing of spirituality here.

My legs are finally tired, so I head in the direction I surmise is the right one. It is, although I do take a couple of wrong turns, ending up in alleys that have no exit. Somewhere in the hutong, not the heavily congest touristized part, but more a locals’ shopping area, I decide to have a drink. There is charm to the little place I find, and FRIENDS is playing with English subtitles above the Chinese. The sound is barely audible under the din of the noisy street and the ventilation system, so I read the script. How ridiculously satisfying to laugh at the goofy familiar characters. It is a good show, even with the sound off!

In an attempt to duplicate the joy of the frozen yoghurt plastered with fresh mangoes that I had last night, I buy another. But somethings are better left as good memories. Tonight the sugary treat is cloying and most of it goes in the garbage. I do indulge in the spiral cut, deep fried potato on a stick. Yum. I walk the touristic hutong for the last time, going to the atm for tomorrow’s cab fare. Before heading to the airport, I plan to go to the art zone, a converted factory I read about.

My final evening in China is spent organizing and packing. I am not really ready for home, as I feel I now have my travel legs. I also am not ready to enter into a world where I will understand what everyone is saying. I am accustomed to communicating with small gestures and not talking at all.